I have a pair of “outdoorsy” sunglasses I usually take with me camping, adventuring or ‘rough traveling’. But on this short 2-night camping trip, I forgot them, and so I wore my regular Oscar de la Renta ones instead.

I casually hung these sunnies from the strap of my backpack while on a hike to a waterfall, and when I slung a camera over my shoulder, one tug meant that it was the end. Clearly, I have an outdoorsy pair for a reason.

Moral of the story: Fashionistas don’t like the great outdoors.

This Saturday, we are hitting the open field with a member of the solar system, Saturn, and the big, silly Happy Face.

For just $2.50, we can get a simple diamond shaped kite with strings at Mustafa.

Yes you’ve read it correctly! Not bikini, not tankini, but facekini! This is the latest Summer craze in China where women cover their faces with nylon masks to protect themselves from the sun while sunbathing. Ironic much? 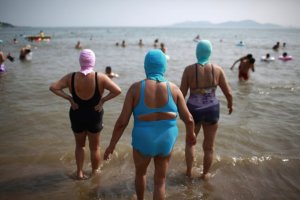 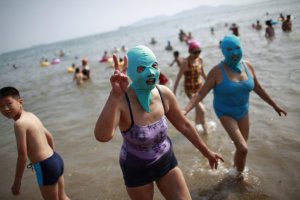 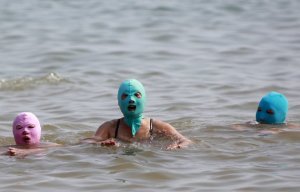 Please shoot me in my eyes if you ever see me in this! *shudders*

With the recent scorching temperatures in LA, this is the seriously most comfortable outfit + setting I have been in:

It’s been triple-digit weather (Fahrenheit) here in Southern California the past week (i.e.: 38 degrees Celsius or so), and I’ve been taking extra effort to moisturize and care for my skin, lest it gets parched.

I was introduced to “Hada Labo” by a house guest last year, and am now accustomed to the peculiar application method to patting the lotion (referred to as a “toner”) into my skin until it is absorbed. The Husband made fun of me when I first started doing so, and often asked if I needed help smacking my face. Tsk.

This is the “regular” Hada Labo toner, i.e.: the one you pat into your skin immediately after cleansing. I’ve used this since about November last year and am just about out of it.

However, since I spend so much time outdoors in summer, I decided to up the ante and fight against the darkening freckles: 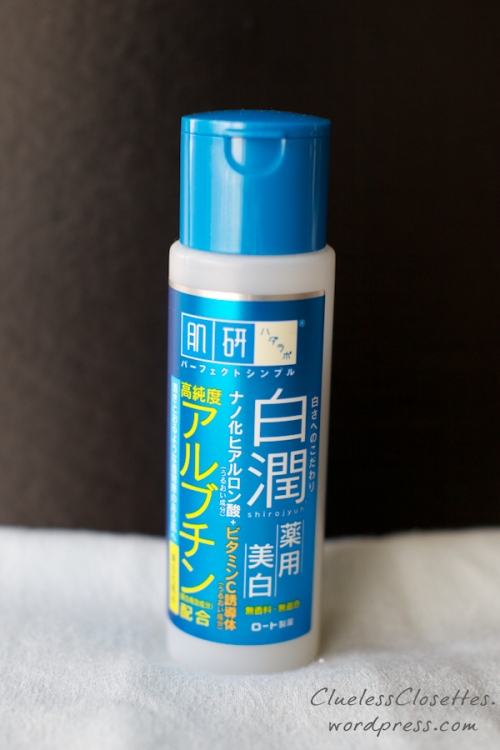 This is the whitening & moisturizing toner. Same concept, but with whitening ingredients. I won’t deny that I had to get a Japanese-speaking/reading friend check it out to make sure I was ordering the correct thing. The moisturizer comes in the exact same packaging, and the English descriptions sound… almost identical.

I also recently purchased the Hada Labo facial wash along with the whitening toner above, since I’m just about out of my favorite which I can’t find in the US nor online:

This doesn’t smell as pleasant as the Nivea one, but a small amount does foam up to a rich lather, leaving my skin cleansed but not tight.

I end off with this L’Oreal moisturizer my Mom left behind, and occasionally a pricey serum I received as a gift: 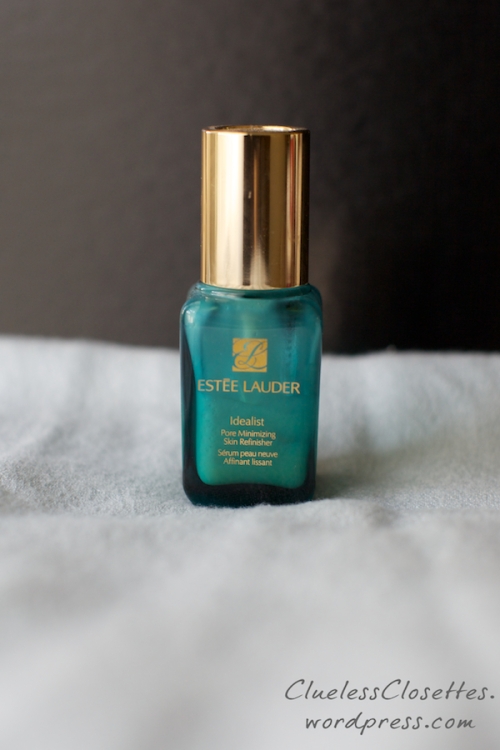 My most recent discovery that I love, snagged for $9 at TJ Maxx, is Elizabeth Arden’s “Peel & Reveal”:

It’s a thick, viscous gel that you apply thinly after cleansing, using the supplied fan brush. It stung a little during my first use, and had a pretty strong alcohol smell. I leave it on for about 20 minutes or so until it dries, then I peel it off, almost in an entire piece, and rinse off my face. I don’t know if it’s purely psychological, but it does feel like it makes my skin smoother and less dull. I use this probably twice a month.

I’m really happy with my simple (and quick!) routine, and though I never used to be one to moisturize, my new home environment surely dictates that I do!

Over the weekend I checked out a craft fair here in Los Angeles, loving the light, breezy cotton dress I scored for $7 at H&M. The yellow Tommy Hilfiger espadrille wedges added a bit of summer sass.

Summer’s here, and it means long hours of work, often in the sun (still no idea why outdoor weddings in the sweltering heat are such the rage). I’ve found it rather challenging trying to look presentable while literally running around all day. I finally figured out a combination of make-up products that last all day and keep me from looking like a greasy wreck:

(Pardon the smudged fingerprints on the tube. Clearly, I used this very often!)
Clinique BB cream. How did I take so long to discover this, I do not know. I wear this every day as a base, oftentimes just on its own, and I LOVE IT! Truly a miracle worker.

On long summer work days, I brush this on lightly with a foundation brush. It evens out my freckled complexion for a smooth, dewy, flawless look without being mask-like. That said, it does settle into fine lines and creases, so if you’re concerned about wrinkles, deduct a few points from its awesomeness. 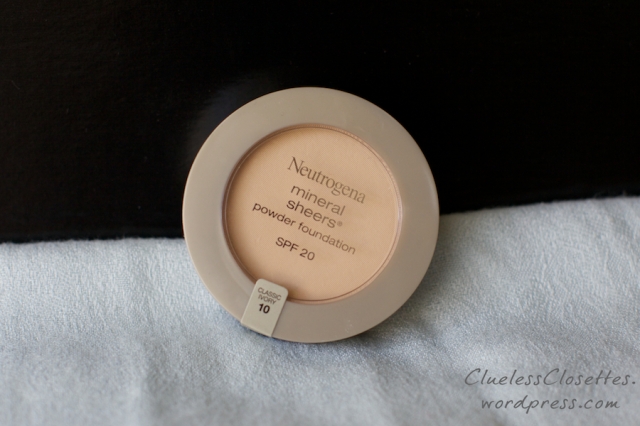 To set the make-up and matte some of the dewiness (I don’t like dewy), I add a light pat of Neutrogena Mineral Sheers powder foundation.

This combination trio works fabulously for long days in the summer heat, and without a single touch-up – not even a blotter sheet – I look fresh-faced at the end of the night.

For regular days out, BB cream + powder works well, and for lazy days/short trips/or just the need for SPF, I go with BB cream only.

Tadaaah! That’s what I ‘wear’ on my face. I wish clothing was as easy to deal with!

but with the right shot of colour…

dressing for flights take a bit of time and effort.

yes, people, the pink umbrella, the lime green comfy cotton racerback and the skinny jeans were no accident.

we started with RESEARCH…

we created the COLOURS for that shoot…

and then, we JUMPED!

(credit goes to longtime friend Sujoy Sen and his partner in crime, Richard Jacobson, for their work behind the lens, and for Richard’s wife, Yvonne, for nudging me to do the shoot.)

We were at The Gap today making a return (ordered this dress in blue as a possibility for our anniversary shoot but it didn’t work) when The Husband found a scarf and bought it for me. “You can never have too many scarves,” he said, much to my astonishment.

Granted, I only have 1 ‘summer scarf’, and this was an additional 70% off. Not bad for $7. Seven has been my lucky number lately, at least when it comes to shopping.

I wore it immediately since my $2 Target clearance t-shirt is rather plain. Seen here with my Calvin Klein camera bag ($109) – gear unloaded, but I hadn’t transferred the personal belongings to my regular purse.

In this episode of modeling-clothes-in-my-front-yard, I try on a smocked tube maxi dress by Old Navy ($32). I ordered it online as part of my quest for outfits for our annual photoshoot, and it arrived today.

Since I had decided on using the cheapo Forever21 blue dress, I was prepared to return this. But damn, this is flattering and really comfortable, so… I guess it gets to stay?

The color is Azalea. Cinched with a very old Forever21 belt (about $7?).

Here, paired with the new patterned scarf I recently purchased to cover my hair at a Sikh wedding. 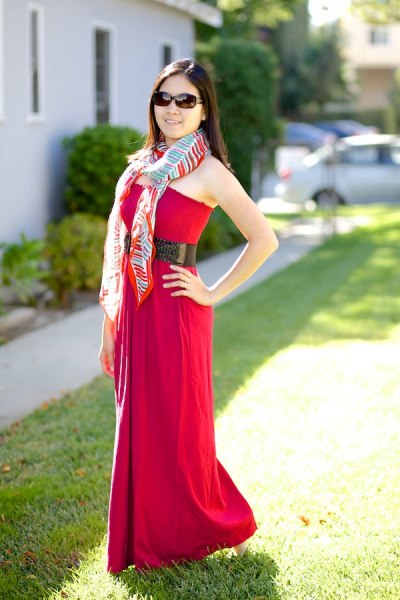 Thank goodness maxi dresses/skirts are in vogue this season! My pudge thanks the fashion gods.

P/S: I don’t usually shop very much, in case my frequent posts with new buys create that impression. It’s just that we’re freshly-headed into a new season, and also because I’m looking for outfits for our anniversary shoot. I hope to put together some reworked mix-and-match ideas from my existing wardrobe in the weeks ahead!

12midnight  thinking about the day’s wardrobe

12:10am   giving instructions to minion (singular)

12:14am  checking to see if minion is still alive. nope, guess she’s fallen off the cliff of work.

12:16am  should i call an ambulance for the minion? hmm. maybe i could push her into another state and let THEM worry about her healthcare bill

Today is July 3rd, which means tomorrow marks another year of marriage for the Hubs and I. Keeping with our tradition of having a photo session done every year, we have been thinking of themes/ideas for a shoot, and of course, that means having to decide on outfits too. Groaaaaan… What to wear, what to wear?

We’re planning on 1 dressy and 1 casual outfit, and today I happened to pass a Forever 21, so I figured I should check it out. I haven’t had much luck with clothing purchases there, save for the $2 basic camisoles, so I was surprised I actually bought this long dress ($27.90):

Wearing a hat + ponytail because I was having a really bad hair day.
Shoes by Steve Madden Luxe. Purchased for about $19 last year, marked down from $150. 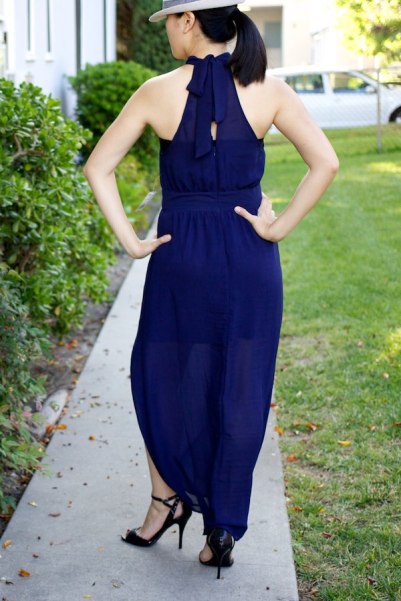 I’m undecided about shoes, and need to figure out some accessories.

On a separate note, when I ducked into H&M with the Husband to try and find a chambray shirt for him, I realized that the summery dress I had tried on a couple of weeks ago is now on sale! Unfortunately there weren’t any blue ones left, so, despite my initial reservations, I purchased one in black. 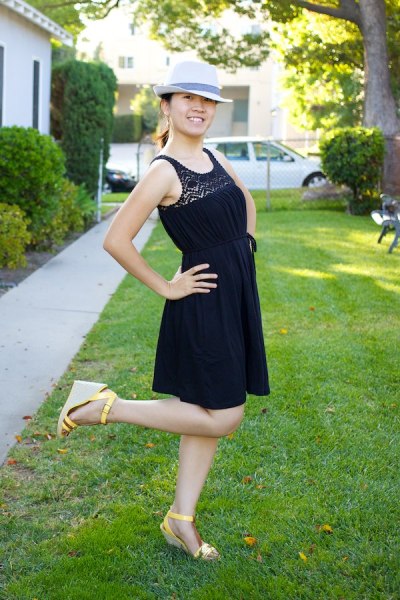 On a whim, I tried them with my summery yellow shoes, and they actually look pretty good!

Now, all I need to do is find a second casual outfit for our anniversary shoot!

Now what should I wear to match these pretty, sparkly, some say scary looking nails? Hmmm……

I just went to Anthropologie’s website today and saw this page of stripes & polka dots, which is very much what The Closettes have been wearing of late.

I guess we’re not only très chic, we’re au courant.

Today’s a ‘personal grooming’ day, so I had to make considerations for a comfortable & practical outfit that would allow access to the necessary body parts.

Managed to throw this together – albeit with a belt (free, came with a top I purchased) that’s not properly aligned – for full functionality. Sleeveless top (Old Navy clearance, $5) and a maxi skirt ($18-ish at TJ Maxx last year) that happens to be pouffed up thanks to a passing gust. Gotta love a breezy, comfy outfit on a hot summer’s day!