We usually work on Saturdays, so when I had a rare opportunity to hang out with friends in a hip neighborhood tonight, I decided to try something new:

I wore my Levi’s Curves skinny jeans with the new Calvin Klein wedges, paired with a leather jacket from Forever 21, a cheapo H&M striped tee, and a $7 Gap scarf.

Thus far I’ve only worn the skinny jeans inside of boots. I can’t say I really feel confident/comfortable wearing them like this. I feel… chunky. 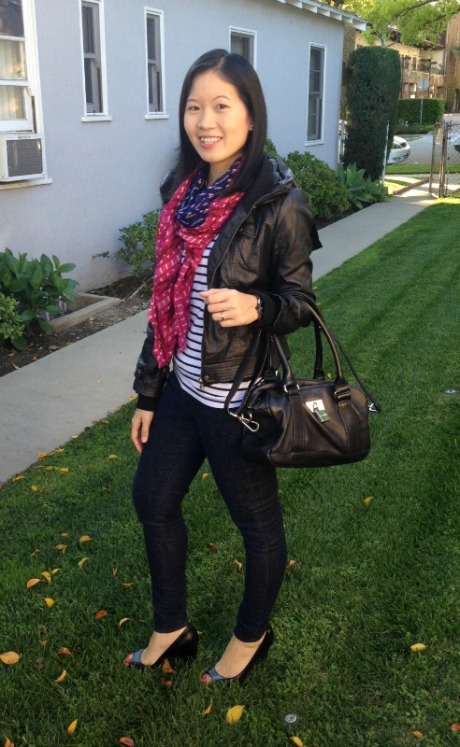 I also tried the outfit with these Steve Madden Luxe ankle strap heels (got them for under $20 a couple of years ago):

These shoes actually go better with my outfit, but they’re notoriously uncomfortable despite the addition of insole padding. Knowing that Los Angeles on Saturday night could mean a parking nightmare (i.e.: walking several blocks – also because The Husband is vehemently against paying for valet – I decided against them.

In the end we had to walk 2 blocks, so I’m certainly glad I made a practical choice!

I recently purchased a discounted red jacket for an upcoming photoshoot, and this time round, The Husband suddenly wanted to fret about his outfit too!

We decided that he needed a winter jacket + some layers. While out shopping today, I spotted a Givenchy leather jacket for $800, marked down from $3000!

The Husband of course insisted on trying out “the fancy French jacket” just for kicks, nevermind that it was two sizes too small for him:

It’s too trendy for his laidback style, but the leather was certainly very supple, and the jacket evidently well-made. But… wow, $3000 full price?!

We purchased the 100% cashmere sweater ($43, pictured) that was soft & plush, not scratchy; and a textured/metallic dark grey Ben Sherman tie for $20 (pictured). The Ben Sherman jacket above looks really good, but we decided he didn’t need a $229 jacket that he wouldn’t wear very often.

Incidentally, he had earlier tried on a Hugo Boss suit that fit him really well. It was on clearance for $350 and I offered to buy it for him, but he declined, since he had just purchased an iPad Mini last week for the same price. Oh well. Fiscal discipline is key!

Yesterday we also picked up a Kenneth Cole Reaction wool peacoat for him at $50. It was quite the adventure, as the coat had no tags at all on it, and we had to bug the manager to figure out a price, rather than just say they can’t sell it to us. She initially said 10% off $99.90 – the price of a similar Calvin Klein coat – but The Husband gave her his offer of 50% off. “Ok, sure,” she said, preferring to be rid of this random article of clothing, and thus the deal was sealed.

I have to say, he looks pretty darn good!

haha! I wore my new purchase from Zipia yesterday – a sleeveless, black and white patterned top – with my black skinny jeans yesterday.

Reached office, put on my new red jacket and discovered I probably looked like some official at the race.

A birthday present for myself… possibly the brightest thing that ever graced my wardrobe. Orangey-red jacket with pinstripe inlay from Mango.

I was told that i should wear my cat glasses to Batman. However,  kinda like it with my new Uniqlo jacket.